Recently an issue was reported about count mismatches in SharePoint 2013 Communities. The number of replies in category tiles sometimes is different compared to the community stats in the web part called “What’s happening”. The actual number of replies is 1 in the figure below. The user who has reported has tried to add, update and delete discussions and replies. 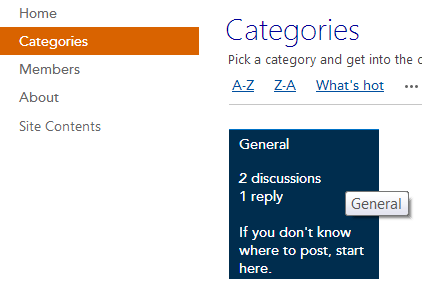 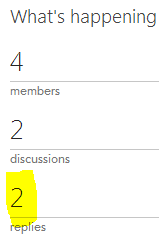 I have invested some time debugging this issue. It would be pity to not share my findings. Well the first thing to do was to determine the type name for the “What’s happening” web part. To do so just edit the  page and export the web part. In the exported .webpart file I saw that the type was Microsoft.SharePoint.Portal.WebControls.DashboardWebPart.

With that knowledge it is time to open ILSpy, an awesome and free(!) assembly browser and decompiler. Load the “Microsoft.SharePoint.Portal” assembly from GAC into ILSpy. Then use F3 to search for DashboardWebPart: 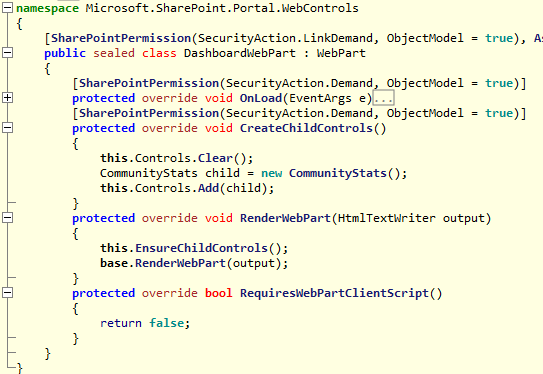 The number of replies is retrieved from SPWeb.AllProperties:

If the Property Bag does not contain it, it gets the number of replies from the list. The formula is as follows:

After checking the web properties I could see that the number of replies there were wrong: 2.

The next step was to determine where and when the Web Properties are updated. The first guess every SharePoint Developer has in such cases is an EventReceiver. Here are all EventReceivers connected to the Discussions List: 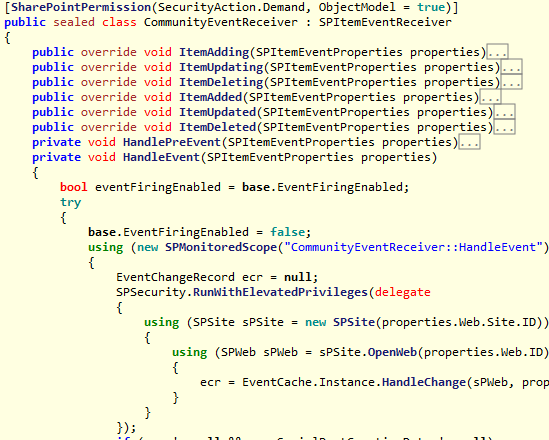 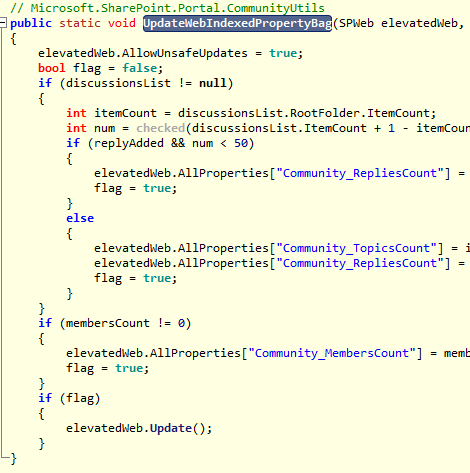 The method is used in DiscussionListCommunityEventHandler.HandleEvent

There is a flag, flag5 that is used to determine if the Web Properties should be updated:

But the flag5 is not true on Delete operations in some code flows: 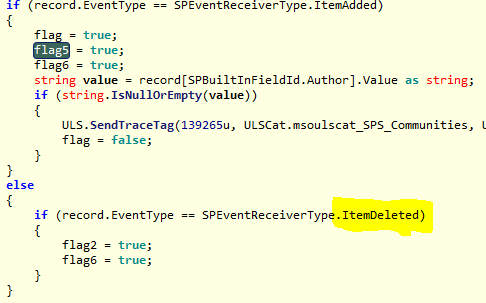 That’s it. So deleting a reply will not have any effect on “What’s happening”. But adding a new discussion will also update the stats: 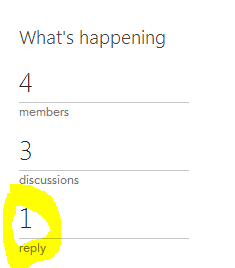 To summarize the debug session, there is an issue in the OOB code that misses to update community stats when deleting a discussion or a reply. Adding a new discussion, or a reply will synchronize the stats.

I live in Lund and work, well, at probably the best company in the world

And going crazy doing it

Me and My doings!

The Vision for a Future of Clarity